Confession time. I am reading six books at the same time.

Last time, I talked about how I have FOMO – or the fear of missing out. So, you might think that I’m greedily reading all of these books because I’m afraid of missing out on something.

But, the truth is, the books are all for different reasons.

There’s the book that I’m reading for sheer pleasure; for a book club (the book When that I mentioned is for the book club) ; the autobiography that takes forever to finish; the one that’s going to be a movie soon; the book about the craft of writing; the one that’s teaching me about Ayurvedic health; and sometimes, there’s even a seventh book if a podcast guest is also an author, so I can bone up before I interview them.

And, that doesn’t even count the two daily newspapers, and the countless magazines that I’ve learned to get digital subscriptions for so I don’t kill more trees.

So why do I read so much stuff?

First of all, I love to read. I’ve always loved to read. I don’t read because of FOMO – the fear of missing out. It’s more like FOGS – the Fear of Getting Stupid.

The older I get, the more I worry that my knowledge will decrease. Or get out of date.

I can handle if my body changes with age. Well, I’m not thrilled about it, but I can handle it. But the thing that scares me the most is losing mental agility.

So I try to keep learning things. And I read. A lot.

What is it you do to keep your mind sharp? I can’t be the only one. Anyone else out there facing FOGS – the fear of getting stupid?

Check out the companion podcast!

In the pre-dawn hours, the thunder snarled right above my roof. One of my dogs trembled and burrowed into my side. A particularly loud clap began with a boom and ended with a sizzle, and then my bedroom was suddenly darker than dark.

The power had gone out, taking with it the glowing alarm clock numerals, the lights on the box next to the television that does magic I can’t explain, the nightlights aimed low for our aging dog’s nighttime navigation.

And, with the darkness, a silence so thick it felt like another blanket on this summer night. Between the cracks and grumbles of thunder, it seemed as though even nature had paused to listen; no night birds, no wind to ring the chimes outside my bedroom window, no errant yowl of a night creature. Just silence.

Gradually, I could see the darker outlines of my two dogs, of the frame of the closet door. And, as my eyes adjusted to the black around me, my ears too adjusted. I heard the restless shifting of the frightened dog on the covers next to me. I heard the undisturbed breathing of my husband, seemingly able to sleep through the storm. And I heard my own breath, a lullaby of steady rhythm.

Sights too often overshadowed by electronics, and sounds too often drowned out by hums and clicks of our everynight life.

In an essay about the book called, “The Art of Stillness: Adventures in Going Nowhere,” author Pico Iyer is quoted as advocating for, “sitting still as a way of falling in love with the world and everything in it.”

So last night, between thunderbooms, I fell back in love. 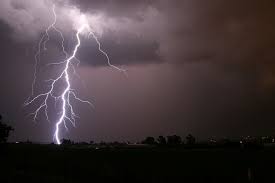